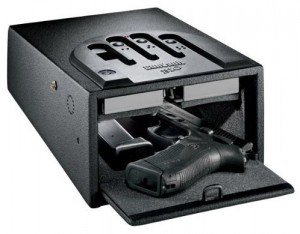 The Gunvault GVB1000 Mini Vault Biometric Gun Safe runs on 9V batteries and can store up to 30 fingerprints. It is also intuitive and updates slight changes that might occur over time to an enrolled fingerprint.

The patented No-Eyes keypad and biometric pad make it easy to operate the safe, even in low-light conditions.

According to the manufacturer, this safe has an improved high-strength lock mechanism.

Tampering with it using hand tools won’t be enough to pry open the door, thanks to its precise fittings.

You can also be informed of invalid entry attempts with its tamper indicator feature.

This product has garnered 23 reviews to date on retail site Amazon.com. Reviews are mixed, with 13 customers giving the GVB1000 high ratings and 10 users giving it a rating of 3 stars or less. 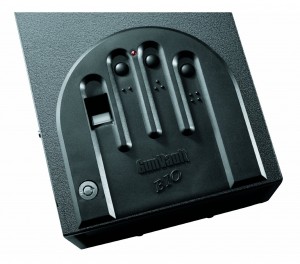 Those who gave the Gunvault GVB1000 low ratings had the following things to say:

When it came to positive reviews, here are some good comments about the product:

There aren’t that many customer reviews for the Gunvault GVB1000 yet, but based on all the feedback so far, this safe sounds like a fairly decent product. If you simply need a secure place to keep your firearms and valuables out of reach from children, this safe will do. You might experience some problems with the door. It might get jammed sometimes (as a number of customers have reported), but this is a relatively minor problem that can be overlooked.

This model is 8 inches wide and about 5 inches tall. If you are looking something that offers a little more space, you might want to check the GVB2000 model.